Water, water everywhere, nor any drop to drink – Pipe Nightmares in Nova Scotia

Posted on May 18, 2018 by onenotsoboredhousewife

I read the Rime of the Ancient Mariner many years ago in school, and we delved lightly into the innuendo and underlying message. I always remembered the albatross and the death ship, but only in these last years, did the reality of this message in its overwhelming and intense form, really hit home. All the water around us, the lakes and rivers, springs and streams, we think we are blessed, but how much of it is safe to drink?

I have gone around the province over the last couple of years, meeting people from different communities and various groups, learning more and more how precious our relationship with nature is, how precarious water is in the world, more so now than anytime in my life. And some of the stories are more devastating than others, but all of them bring a mixture of anger and sadness. Those involving water, were well outside my field of imagination, never previously aware how horribly wrong things are going in my home province. I was always of the mind that these types of concerns were across the ocean, or in far off places. I know I am not the only one.

On Monday, May 14, 2018, I attended a public gathering in the Harriettsfield – Williamswood Community Centre, to support the community in their continued bid for clean safe drinking water. This was not the first public meeting I have attended there, even though I am not a resident of the community. I am not the only person who comes from outside of the area to show support to the residents. And it is not the first time I was bewildered by the local political antics considering the gravity of the situation there. They need clean water, and the politicians appear to not understand or honestly care, that they are in a full blown crisis.

The governments, both municipal and provincial, have played a part in creating the water crisis, from permitting uranium exploration in the 70s, to approving a C&D facility in the middle of a residential community, to failing to enforce environmental regulations and ministerial orders, to not following through on the urgent intention to extend municipal water service to the communities since almost a quarter century ago. Even staff at the municipal planning office, recommended against the zoning amendment, but they were overruled. Now both levels of government are participating in a failure to fix what they have shattered. Stall tactics, ongoing inaction and now “awaiting” a decision of the court, after the twelfth delay in a criminal case, have given this site more time to cause more harm to more people. Three more residents within 500 m of the site were diagnosed with various cancers in the last weeks. The community cannot continue to wait for the next obstacle and the next after that.

The residents have always been opposed to this facility operating, uphill and next door to the many homes in the area especially after having been encumbered with water concerns since 1981. They fought hard against the C&D operation, the changing of the zoning to allow it, and the failure to monitor wells. They have been outraged by the secrecy and undisclosed burying of 120,000 tonnes of waste, and with 9 years worth of records simply missing, no one really knows what is in the ground there. But the residents are not responsible for this. And this part of the story causes the most offense. These people are victims of the choices our governments made. They have never done anything wrong, and do not deserve this, yet they are left to fend for themselves in untenable conditions, carrying water to their homes from a local church that has opened its water taps to them, and replacing plumbing fixtures as the corrosive water eats through them. And government continues to operate without penalty or remorse, and in fact without ever having to admit fault or offer apologies to these members of our larger community. 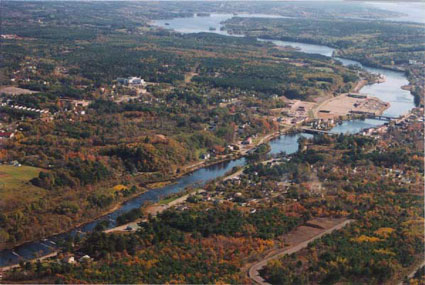 Meanwhile, amid great fanfare this week, the first of 100 homes along the Lahave River broke ground to install a proper septic system, to replace their illegal straight pipe that has pumped raw sewage into the Lahave River for decades. There are actually 600 homes currently using straight pipes, which have always been illegal, but only 100 homes have agreed to participate in the tri-level government program that will shell out $17 Million to help these homes meet legal wastewater regulations. Don’t get me wrong, this a great deal of progress in a decades’ long fight to clean up the Lahave River, but the homes built along the river, chose to use illegal straight pipes, and now the government is bailing them out. I do also want to make clear, that not all of these homes are still owned by the original owners who installed the straight pipes. That doesn’t absolve anyone from continuing to use straight pipes, but at the very least, I can accept that some of the current owners did not make the choice to install the pipes.

At the same time, any Nova Scotian paying attention to the Northern Pulp saga in Pictou, is fully aware that an indemnity agreement between the province and the mill, will likely see the taxpayers of this province paying for a new waste facility for the mill, if it is approved, which includes an approximately 10 km long pipe that will pump pulp waste water (effluent) into the Northumberland Straight, and into a thriving lobster fishing ground. Without getting into all the technical and opposing views on this, most of us are very much aware that such a plan is sure to impact the NS Fishing Industries in a negative way. And this pipe will allow a mill, that has repeatedly failed their air emissions testing, is responsible for much of the clear cutting and use of glyphosate spraying in the province, has rendered Boat Harbour a dead zone, and is likely the primary cause for alarming rates of cancers, respiratory and cardiovascular disease and other existing health statistics in the Pictou area, to continue doing the same for another unknown number of years. The costs for this new system are in the range of $100 Million so far, and this taxpayer is wondering how the province will justify such an expense for a mill that is 26 years past its anticipated life span, has done so much damage to our forests that the availability of pulp to sustain this mill is doubtful, and the waste being pumped out will contain heavy metals, dioxins and furans, and appears to be in complete violation of federal regulations. Those who have been inside the mill in recent times are often shocked and refer to the scary working conditions for its labourers. It should also be pointed out that the indemnity agreement has already created at least $133 Million in costs to clean up Boat Harbour. I fully support this specific expense, to correct a corrupted act by our governments over 50 years ago.

So I look at these situations very closely, and I am more than a little resentful of government and the decisions they make regarding communities and how they use our tax dollars. To bail out a community of homes that has known they are doing wrong for decades, is one thing, but to use our tax dollars to fund the continued operations at Northern Pulp, while the community languishes due to the faults of a government and industry partnership is vile. To put another major and much larger industry, the Fisheries, at risk is ludicrous. And to choose to fund the mill’s need to redirect their toxic waste, while allowing the communities of Harrietsfield and Williamswood to continue to suffer without clean drinking water because of government decisions is heinous.

If the people of Nova Scotia were properly and completely informed of the outfall of their taxpayer investments, and the failures of government to meet the critical needs of Nova Scotians, in favour of these questionable and unfavourable expenses, I don’t know very many who would agree to the path we appear destined to follow. I am only one member of a growing list of Nova Scotians who are tired of government ignoring the wishes of the people, ignoring the well-being of the people, ignoring the repeated risks and damage they inflict on communities in this province, and the lack of transparency and especially common sense that shield these decisions from a broader reckoning with taxpayers. I am tired of the lack of morals and am often awed by the ability of members of government to carry on and never consider the human beings impacted by these actions. Who is capable of this?

I suggest since the government appears to have the money to spend $100 Million on Northern Pulp, that they choose not to. I recommend they use that money instead to continue fixing the straight pipe issue in Lunenburg County, cleaning up the Pictou Mill site, and I suggest they prioritize safe clean drinking water in communities that have been impacted by the mistakes, misdeeds and poor judgement of governments past. Maybe someday we will be able to drink and fish the water, water everywhere, without thinking about and worrying about what the government has done to it.

7 Responses to Water, water everywhere, nor any drop to drink – Pipe Nightmares in Nova Scotia