Fact or Fishin’ – Part Two – Every lobster for themselves

Posted on July 12, 2018 by onenotsoboredhousewife

You can read the original Fact or fishin’ article here.

Living in Nova Scotia can be downright bloody depressing at times. We have a beautiful province and loads of potential. People here are hard workers and entrepreneurs. Dreamers and doers. Survivors. We get beaten down by bad decisions and get up again and keep moving.

But we have people in charge who have lost their way and therefore our hope for peace and prosperity are lost in decision-based science and nonfactual hyperbole.

I am a little perturbed this week. After a huge success at the #nopipe rally last week in Pictou, and after news that Northern Pulp was admitting they have a few serious issues with their pipe dream, you would think we were making progress, having an impact….

But instead, a PC leadership candidate has come out spewing completely false and far fetched rhetoric, accusing the folks who attended the rally of being professional protestors and accusing the #nopipe side of the fight of the usual ‘selfishness’ and ‘lack of understanding’ crock every politician spews when he wants you to get behind a bad idea. Never once did he acknowledge the valid concerns held by the fishermen and their families. Not for a moment did he speak about the 50 plus years of pollution endured by the community as a whole or the injustices imposed upon Pictou Landing First Nation.

In what I perceive to be an attempt to misinform or mislead members of his party and followers from other areas in the province, Mr. Lohr has determined that some jobs at the mill and associated organizations were more important than every job tied to the fishery. And not only those jobs in Pictou, but every fishery job in the province. If you taint lobster and other food fish with pulp mill effluent, heavy metals and carcinogens, and the government has a hand in approving this, the entire NS Fishery will be cast in broad judgement. But then he claims that every forestry worker is employed because the Mill exists, when in reality only 200 or so are directly employed and estimates by the Mill are that they create 2,043 jobs. Considering that is from the Mill, it should be assumed it is likely a high estimate. But Lohr goes so far out in left field with his assertions in favour of the mill and overblown claims about their economic impacts on the province, he even tries to convince people by district how the mill closing will harm them. He emailed Metro Halifax PC party members and said’ “That matters to the whole province – even in Metro Halifax. Did you know Northern Pulp is the number one shipper out of the Port of Halifax?” What? Is he nuts? The Mill is the top shipper out of Halifax? The Port obviously says otherwise, citing tires and seafood as the two top industries. The forestry industry as a whole isn’t even the top shipper, let alone the mill in Pictou! He also told the Premier of PEI to mind his business – as if the fishing boats from PEI on the Northumberland Strait aren’t part of that Premier’s business…. And he wants to be in charge? Oh my word.

Then too, the NS Premier came out and repeated the same words he and every one of his multiple Environment Ministers has said right before smashing communities’ to bits with bad news… ‘based on Science and Facts’. That has to be the worst news. There is always a new Minister of Environment right before or after a new bad news session too. It’s kind of an omen. And for some reason, no one thinks the fish, including lobsters and clams matter. Yet they are part of most of the sad stories about our environment in this province.

Science and facts were used to re-open the Donkin coal mine. Their science and facts did not take into consideration the dangerous conditions that exist in the mine. They failed to mention the company running things may not give two flying hoots about the well-being of those they send down to work in them. Their facts and science never mentioned seawater running into the mine through cracks and crevices, ceiling cave ins and rock fall (rocks the size of cars), and most certainly never even considered the safety concerns around methane and worker safety while issuing an operating permit.

Science and facts were used to approve the tidal turbine installed in the Minas Passage. Their science and facts have never admitted that the public and especially the fishermen were right about a number of their concerns, like the cameras not working, the electromagnetism and resulting corrosion, the lack of actual power created that was no where near the level claimed by the Minister of Energy, and only admitted months afterward that they had been aware of failures immediately after the turbine was put into commission.

e and facts were used to approve a quarry in Fall River. Their science and facts ignored the public concerns about their wells, now there are homes running out of water, which they never did before, homes replacing hardware in their plumbing due to mud and particulate caused by disturbances in their wells, that never existed before. There have been dead fish found in the brooks going into Soldier lake – that has happened before when the airport was built, and when Exit 5A was built and acid rock drainage killed all the lakes and rivers for miles and miles. That fact was presented to NS Environment by the public, and they chose to ignore it. That fact has been well studied and recorded and reported by the NS Government themselves and is treated at a cost of $1 Million per year, for several decades now, and they chose to ignore it. And now we have dead fish.

Science and facts were used to decide to burn tires at the Lefarge Plant in Brookfield, next to a lake already severely contaminated by the same plant. Toxic mercury and Arsenic levels cannot be blamed on nature alone. Not when there is a massive cement plant standing in the background at one end of the lake. We can pretend they are not related, but until the government determines another cause, and while other districts are finding cement plants are to blame, it is in the minds of those who live there, who are told not to consume the fish in the lake and those who are watching and supporting that fight, their lake is being destroyed and now their air will be as well. Tire burning results in airborne heavy metals and the dioxins and furans will travel as far as the wind takes them before they settle, either quite locally, or further away.

Science and facts were used to decide to allow a salt brining process in the Shubenacadie River. Their science and facts said there was one tommy cod in the river over 7 months, yet Dale Poulette, a Water protector who has lived at the River for most of the last two years was able to catch sometimes 40 in just a day. Their science says the process will not change the river, and their science, just like the pipe science in Pictou ignores a longstanding reality, and did not take into consideration that a River with mud shores would close their brining pipe off, fill in their “mixing Channel” and rebuild its centuries old path through the red mud it has moved through forever. Their facts and science never talk about the fact that the riverside site floods many times over during the year, voiding any environmental protections their settling ponds are supposed to provide. 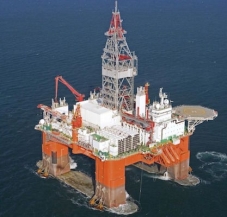 Science and facts were used to approve the BP offshore oil exploration without an emergency capping stack in local proximity. Their science and facts did not expect or acknowledge the risk of drilling fluids being spilled already, only three weeks into drilling. That drilling fluid is actually a synthetic based mud and will settle on the ocean floor and will smother the seabed.

I could go on and on, but then I would just be repeating myself. I have talked about the NS Liberals and their Science and Facts before. It is an ongoing issue. And so many communities are impacted by their Science and facts, that we are getting uncomfortably accustomed to the process.

You know this routine…

I could talk about clear cutting and spraying, mining in watersheds, fracking and radioactive sludge ponds, NS Power and striped bass, dumps next to residential communities, etc. And in every single one of these approvals, you will find a public who fought hard to stop them. They tried every time to demand real science and facts. Not those propagated by the proponent to support their goals. The public have been ignored. And often times the public have been insulted and disparaged, called names and demeaned for stepping on the real professionals’ toes with our science and facts. Those projects that have been approved have given solid evidence that the public has been right, far too many times to continue being ignored. It feels like the current government is just playing a game of Russian Roulette with our environment…. which project will make us rich? Which industry will make this province great again? All the little missteps like dead fish and dead lobster fisheries won’t matter if we cut down all the trees and ship pulp to Asia so it can be flushed down the toilet, right?

The other element of depression is the amount of taxpayer money involved in these big bad ideas. Either funding them, sustaining them or cleaning up after them. It is hard to fathom what $100 Million would do for healthcare or education or seniors’ housing if not used to buy a fishery killing pipe.

So what do we do about this? Most will tell you, vote them out – but by then it will likely be too late, and the next question is with what? While we have been able to ascertain how fruitless talking real science and facts is with the current government, who do we replace them with? What do we sacrifice in this province by trading one status quo for another? Politicians of all stripes in this province need to start taking a stand and representing the people here. They need to demand better protections for the environment, the people who live here and local industries like the fisheries that make up almost 28% of Nova Scotia’s export economy, not the foreign bodies using this province as a test site or dumping ground.