Sticks and stones will break our bones, but name calling should never get you elected

Posted on October 12, 2018 by onenotsoboredhousewife

Growing up, we were told not to call people names. It was a rule in life we learned right along with, don’t hit or steal, or lie or bully. Share. Be kind. Don’t stare. Simple little rules to live by that made you a nice person. We learn it from childhood. And when you call people names you don’t get to pretend to be doing it to be funny. You are trying to hurt or demean someone. So in turn, you don’t stand by and allow someone else to do it to you, or others either.

Somewhere along the way though, our most esteemed and prominent figures have determined that for them, this rule doesn’t apply. Grown ups, with so called important roles, like very much to name call. They believe it is appropriate to disparage and jeer at anyone who does not agree with them or who opposes their policies. 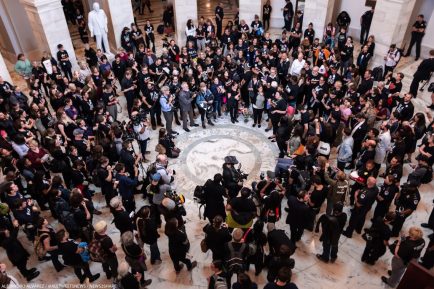 Last week it was implied that “paid protestors” were in attendance at the Kavanaugh hearings in Washington, and protesting Senators, disrupting the hearings and confirmation votes, to call out the Supreme Court nominee on his poor record and their disgust for his nomination to the highest court in the USA. And the President said the women seeking face to face interactions with Senators were “paid protestors”. This tag, “paid protestors” has become a favoured smear on those who would dare to show up and speak out. In this recent case, it started with a right wing, conservative web post but then Fox News jumped on board and reported the protestors were paid.

There has been a lot of name calling in the US over the last two years. It doesn’t make anyone feel better or look smarter. I often feel embarrassed for a country that touted its morals across the globe forever, now festering in rock throwing and low grade mean spirited character assassination. And what it leads to is defensive incredulity when one of the names called might actually be accurate.

But long before Trump, I felt the lack of maturity brewing around these parts and have gotten to a point where I cannot fathom some of our elected members were actually chosen… on purpose, to represent… anyone. 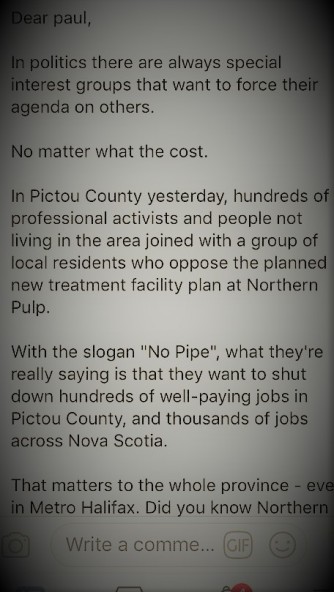 A PC leadership candidate in Nova Scotia, hoping to become Premier, managed to alienate thousands across the province after claiming those who attended the Land and Sea #nopipe Rally in Pictou in July, were paid to be there. But he didn’t stop there, he called many of us “professional protestors” and then “radical eco-left” and “lefties”. He made inaccurate statements claiming people had been sent by plane by the David Suzuki Foundation, a claim refuted by the Foundation. But it was the ream of insulting derogatory and false implications that gave us all a glimpse into who this MLA really is.

It is not a good sign that he feels comfortable presuming so few care about the damage proposed by Northern Pulp in their stalled pipe plan. His lack of consideration of the attendees at the rally goes much further than simply trying to discredit those who were there, by implying they wouldn’t have been if they were not paid to be. If he believes that, he is not fit for the leadership. But he also misrepresents facts, claiming this one corporation is responsible for most of Nova Scotia’s economic stability. He spouts really inaccurate statements like saying the mill employs 11,000 people. Or is the top exporter out of the Halifax Seaport. These mistruths are easily refuted. Even his pet corporation does not agree with his claims.

And the people know this. First, Nova Scotian’s care very much about their seacoast, the fisheries, tourism and our health. People took the day off work to attend and travelled from various parts of the province where the mill’s clearcutting and spraying, as well as the pipe plan have exhausted patience and poisoned political will for far too long. Far more people were concerned with protecting the existing and important areas around the mill, but also the many thousands of jobs on the line.

The lobster industry was represented by hundreds of boats from as far away as PEI.

So too were the First Nations, whose Chiefs came to support Pictou Landing First Nation along with the others, supporting the closure of Boat Harbour, regardless of the anticipated failed pipe plan. 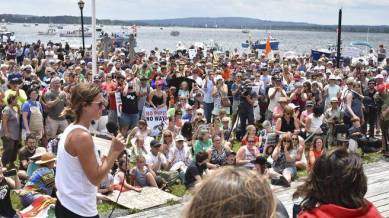 People in this province are fed up, afraid and getting angrier about it day by day. Those who are watching this leadership candidate run his mouth in favour of various policies from everything bad for the environment, bad for our forests and rural communities to promoting Uber and Religious Freedom (actually his policy is related to funding accessibility in churches, but he called it Religious Freedom). Any of his good ideas get lost in the muddle of poor behaviour toward a good portion of the province, and his spewing of absolutely farcical and inaccurate un-facts.

Even when his errors were pointed out to him, and truth offered by those he was insulting, he doubled down and carried on with his mantra of demean, disparage and diminish, while continuing to use false accusations and far-fetched figures. He seems to think he looks like he is being tough on the ever horrible environmentalists who hate the forest industry. And this is just another fallacy. He fails to speak on behalf of the lobster industry in Pictou even as Fisheries critic and yet feels compelled to criticize the Minister on other aspects of the sector.

Based on what we see going on south of the border, thanks to an overwhelming bystander mentality, and the rise in poor behaviour there, the localized version of it is unsettling. And unacceptable. What we know about this campaign tactic is he has no idea of or chooses to avoid realities in various important issues. He concentrates a lot of energy on making sure a portion of the population knows he despises them. He believes he has support. 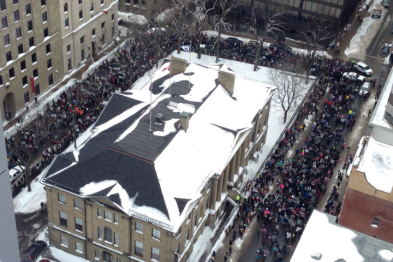 But we have a leader like this already. Right now. We are struggling to get out from under this “my way or the highway mentality”. We have already had enough with the name calling and demeaning behaviour for years now while the Premier fought an unfair and unbalanced fight against teachers, nurses and other sectors. We aren’t going to benefit from the same (possibly worse) level of disregard and loathing from a new Premier.

And as far as being paid protestors, I can tell you that the poor governance in this province can and will drive people to new and loftier measures in trying to get a bit of political attention. And they do it for free because it matters that much. He should be grateful they are just throwing a rally once once in awhile. Grateful the rallies often include a prayer and some really good music. If he and others like him keep it up, ignoring and insulting the public, we could see violence and destructive action.

And while we are protesting for free, volunteering our time and voices to the greater good, Mr. Lohr should take a look in the mirror. As a member of the opposition, he stands in the legislature every time the house is in, and calls out, chastises and… protests the performance and actions of government. And, he gets paid well to do so.

Yes, Mr. Lohr. It is you who are a paid protester. Since deciding to run for party leadership, you have not talked a lot about the people of Nova Scotia, preferring instead to make promises and pronouncements that benefit the profit margins of corporate bodies, some of which are foreign entities. You are also a perpetrator of mistruths. A lobbyist of polluters and a promoter of corporate welfare. 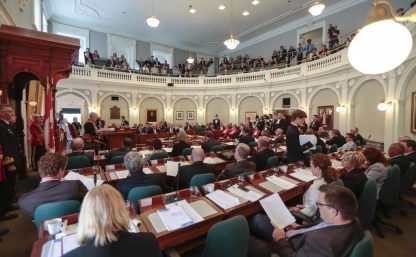 I am not sure if there is a handbook for wayward politicians, or if they take online courses on public trust, but they certainly all seem to come together in the same place with their disparaging of an electorate they do not understand or appreciate. They seem to sink to new lows every week. Voting for someone who jeers and sneers at you, is what I would liken to a lack of self esteem. We do deserve better, and we need to grow up and stop choosing these people as leaders and then act surprised when they drag us down to their apparent level afterward.

I can’t imagine his party members voting for him to be their leader. He has spent far too much time ensuring people feel he is a loud mouth, disrespectful, ill-informed bully. I will not vote for anyone who defines their candidacy with blatant disregard for the people they are supposed to represent and blatant disregard for facts. I won’t vote for their party. We only need to look at the current government, the Ontario Premier or the US president to see for ourselves what electing such tone deaf individuals means for us.

3 Responses to Sticks and stones will break our bones, but name calling should never get you elected